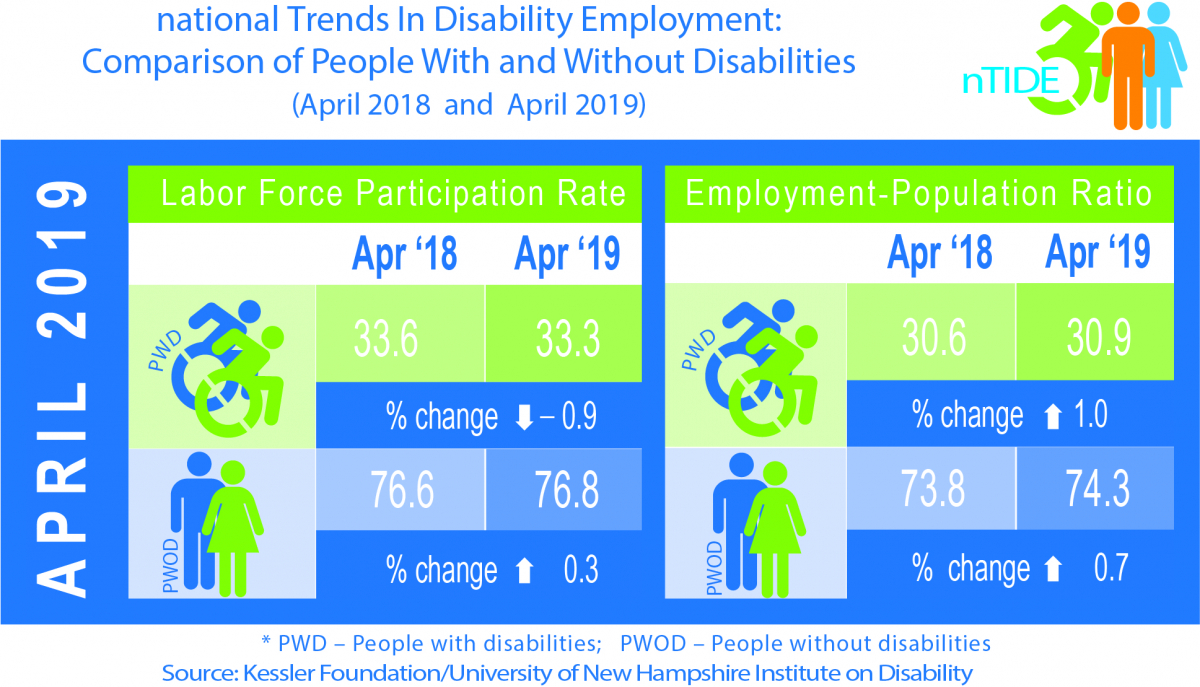 Many employers have diversity policies for hiring and recruitment, but disability is specified in only a small percentage of policies. For most employers, diversity means gender, race, religion, and sexual orientation. The potential contributions of employees with disabilities to corporate culture and productivity are often overlooked. The Disability Equality Index, a joint initiative of the American Association of People with Disabilities (AAPD) and Disability:IN, offers businesses an objective way to evaluate their disability policies and practices, and identify opportunities for improving inclusion of people with disabilities in the workplace.

Learn more about today’s job numbers and strategies for improving disability inclusion in the workplace from the May 3 nTIDE webinar. Listen live, or visit the archives at https://researchondisability.org/home/ntide

“In spite of the labor market’s continuing strength that has created a sustained need for workers, people with disabilities are not seeing more benefits,” said John O’Neill, PhD, director of employment and disability research at Kessler Foundation. “Let’s hope that for the remainder of 2019 that we return to the 2016-2018 pattern of steady improvement in the employment situation for people with disabilities.”

“As full employment continues, it is surprising that the positive trends for people with disabilities that we saw in 2016-2018 are not also continuing,” noted Andrew Houtenville, PhD, associate professor of economics at UNH and research director of the Institute on Disability.  “This pattern suggests that the jobs available when we reached full employment a couple of years ago may have been better matches for people with disabilities than jobs that are becoming available today.”

The continuing strength of the labor market has created a sustained need for workers in many sectors of the economy.  Given the unmet needs, the economic climate is more favorable to populations that are traditionally bypassed by businesses, including jobseekers with disabilities. The Disability Equality Index helps companies audit their human resource policies, and identify where they can maximize their opportunities to hire qualified individuals with disabilities. Those that succeed reap the benefits of higher revenue, higher net income, and improved profit margins. Increased diversity inclusion in the workplace could have a substantial impact on the general economy, according to Jill Houghton, president and CEO of Disability:IN. Houghton estimates that the nation’s GDP (gross domestic product) could increase by $25 billion if just one percent of jobseekers with disabilities joined the labor force.

Partnering with local disability organizations for recruitment was effective, as was outside assistance with job training, but both were underutilized by employers. Supervisors reported that having an established process for requesting accommodations was very effective, but in place in only 34 percent of companies. Similarly, having a centralized accommodations fund was viewed as extremely effective, but available in only 16 percent of companies. Among hiring practices, supervisors reported benefits in being trained in accessible application and interview techniques, and in review of hiring procedures to ensure accessibility, but less than half of companies offered these.

“Broader implementation of effective practices could expand employment opportunities for individuals with disabilities,” noted Dr. O’Neill, a survey co-author, “but overall, the survey revealed that the key factor in disability inclusion was the commitment of upper management to the success of supervisors and employees.”