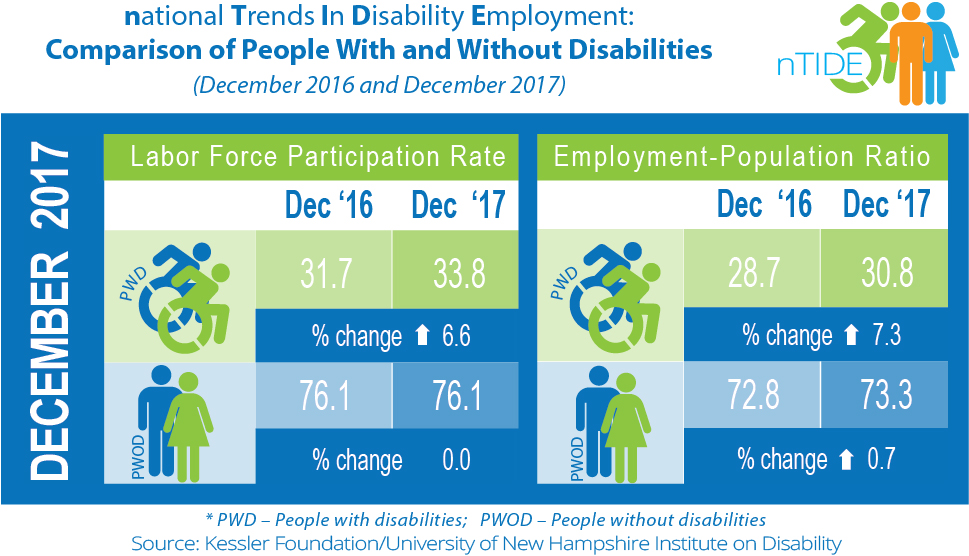 Durham, NH – Despite the December’s lag in U.S. job numbers, Americans with disabilities continued to show strong gains in the labor market, according to today’s National Trends in Disability Employment – Monthly Update (nTIDE), issued by Kessler Foundation and the University of New Hampshire’s Institute on Disability (UNH-IOD). This upward trend, which began in the last quarter of 2016, has reached 21 consecutive months for this population.

Through successful public-private partnerships, people with disabilities are finding competitive jobs in today’s job market. With funding from philanthropic organizations and private foundations, partnerships are being established that integrate recruitment, hiring, training, placement and support, toward the goal of connecting qualified candidates with job openings in government and private industry.

“A landmark has been achieved. Throughout 2017, we have seen improvement in the proportion of people with disabilities who are working,” according to John O’Neill, PhD, director of employment and disability research at Kessler Foundation. “This solid year of employment growth shows that the efforts of people with disabilities striving to work are translating into success in the workplace,” he added.

In New York City, vacancies across the City’s government are being filled by employees with disabilities through NYC:ATWORK, a citywide employment initiative coordinated by the Mayor’s Office for People with Disabilities (MOPD).  NYC:ATWORK connects people of disabilities with available jobs in the private sector, as well as in city agencies through a coalition of public-private partners that includes major companies, city agencies, and state vocational rehabilitation services.

Civil service jobs typically offer stability, good compensation, and opportunities for advancement, but the processes for finding and applying for available positions can be lengthy and involved.  Although many people with disabilities could qualify for these competitive positions, they face numerous obstacles on the pathway to employment by states, counties and municipalities. New York City’s 55-a Program (Section 55-a of the NYC Civil Service Law ), facilitates access to government jobs by allowing waiver of the requirement for written civil service examinations for qualified applicants with disabilities. This program is administered by the NYC Department of Citywide Administrative Services (DCAS), which partners with city agencies to identify vacancies. Eligibility for the 55-a Program is determined by the New York State Office of Adult Career and Continuing Education Services – Vocational Rehabilitation (ACCES-VR).

“MOPD and DCAS’s partnership to create access to jobs and careers in city government is at the heart of NYC:ATWORK,” said Commissioner Victor Calise, MOPD. “Working to streamline and update the process of 55-a is truly a collaborative effort, providing an efficient recruitment and on-boarding process that works for the benefit of the city and our workforce.”

NYC:ATWORK is funded by the grants from the Poses Family Foundation, Kessler Foundation, Institute for Career Development, and ACCES-VR. The program will be grant-funded for three years before transitioning in-house at the NYC Department of Small Business Services.

The next nTIDE will be issued on Friday, February 2, 2019.  In February, the 2017 Year-end nTIDE will be released, summarizing the exciting developments of last year, and providing a look ahead at the prospects for people with disabilities in 2018.

Join our nTIDE Lunch & Learn series today, January 5, at 12:00pm Eastern. This live broadcast, hosted via Zoom Webinar, offers attendees Q&A on the latest nTIDE findings, provides news and updates from the field, as well as invited panelists to discuss current disability-related findings and events. Crystal M. Monge, Executive Director for Customer Engagement and Compliance in New York City, will join Drs. Houtenville and O’Neill, and Denise Rozell, policy strategist at AUCD, to discuss today’s findings. You can join live, or watch the recordings at: www.ResearchonDisability.org/nTIDE.