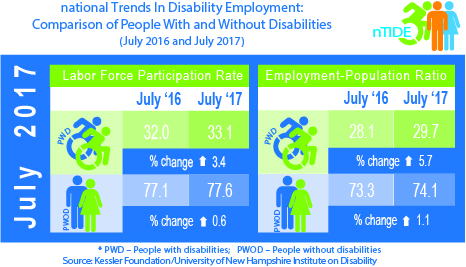 Durham, NH - Sustained job growth for Americans with disabilities contributed to the upward trend in the labor market, according to today’s National Trends in Disability Employment – Monthly Update (nTIDE), issued by Kessler Foundation and the University of New Hampshire’s Institute on Disability(UNH-IOD). This extends the record trend to 16 consecutive months for this population. Integrating resources and strategies among stakeholder groups, including funders, government agencies, community organizations, and employers, is essential to meeting the needs for accessibility, job training, and extended support services for people with disabilities in the workplace. National leaders in disability employment are coming together with a shared commitment to maximize the impact of the many and varied funding streams.

“These results show that people with disabilities are working, want to work, and are indeed striving to work,” said Andrew Houtenville, PhD, associate professor of economics at UNH, and research director at the Institute on Disability.

Aviation is one sector that is leveraging its recruitment efforts through the city’s initiative. “Our goal is to help move the needle forward for people with disabilities.” said Bob Bilak, director of Crew Relations and Compliance Programs at JetBlue. Aligned with our mission of inspiring humanity, our business practices focus on innovative hiring and business mentoring programs. Gainful employment speaks directly to humanity, confidence and self-esteem. Through our partnership with NYC: ATWORK, we have created Reaching Blue Heights Talent Pipeline program, providing access and opportunities for those with disabilities to pursue careers with JetBlue. We also help some jobseekers gain the skills and resources needed to gain employment elsewhere.”

Join our nTIDE Lunch & Learn series today, August 4, at 12:00pm Eastern. This live broadcast, hosted via Zoom Webinar, offers attendees Q&A on the latest nTIDE findings, provides news and updates from the field, as well as invited panelists to discuss current disability-related findings and events. Stephanie Powers, Senior Director for Policy and Partnerships of the Council on Foundations, will join Drs. Houtenville and O’Neill, and Denise Rozell, policy strategist at AUCD, to discuss today’s findings. You can join live, or watch the recordings at: www.ResearchonDisability.org/nTIDE.