Durham, NH – Americans with disabilities saw modest job gains in November, indicating the continuation of an upward trend, according to today’s National Trends in Disability Employment – Monthly Update (nTIDE), issued by Kessler Foundation and the University of New Hampshire’s Institute on Disability (UNH-IOD). These gains extend the upward trend that resumed in August 2018, following a brief downturn. 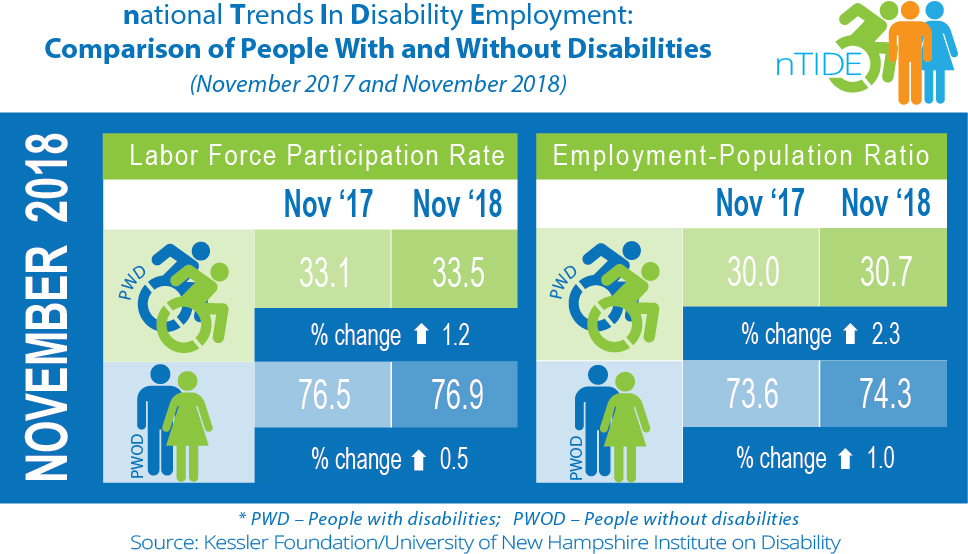 On December 3, during the commemoration of the International Day of Persons with Disabilities at the United Nations, a minute of silence honored President George H. W. Bush, who died on November 30. In 1990, Bush proudly signed the Americans with Disabilities Act (ADA), calling it “the world’s first comprehensive declaration of equality for people with disabilities.” Almost three decades later, the ADA continues to ensure fair and just access to community life and the workplace for individuals with disabilities.

“These November data continue the upward trend in economic indicators for people with disabilities,” said John O’Neill, PhD, director of employment and disability research at Kessler Foundation. “The continued strength in the labor market is producing higher demand for workers, including jobseekers with disabilities.”

At the signing of the ADA, President Bush addressed the potential benefits for American business. Advances in civil rights and accessibility meant that individuals with disabilities would be better positioned to contribute to the workforce, providing a new source of workers. “Today, we know that the majority of Americans with disabilities are striving to work,” remarked Dr. O’Neill, “and that many are succeeding in overcoming obstacles to finding and maintaining work by getting further education or necessary training, and finding solutions to transportation issues.” Jobseekers with disabilities find some barriers more difficult to overcome, however, according to the 2015 Kessler Foundation National Employment and Disability Survey. They cite a major barrier to be employers’ underestimation of their ability to do the job.