nTIDE January 2018 Jobs Report: Americans with Disabilities Kick Off the New Year with Sharp Gains in the Labor Market 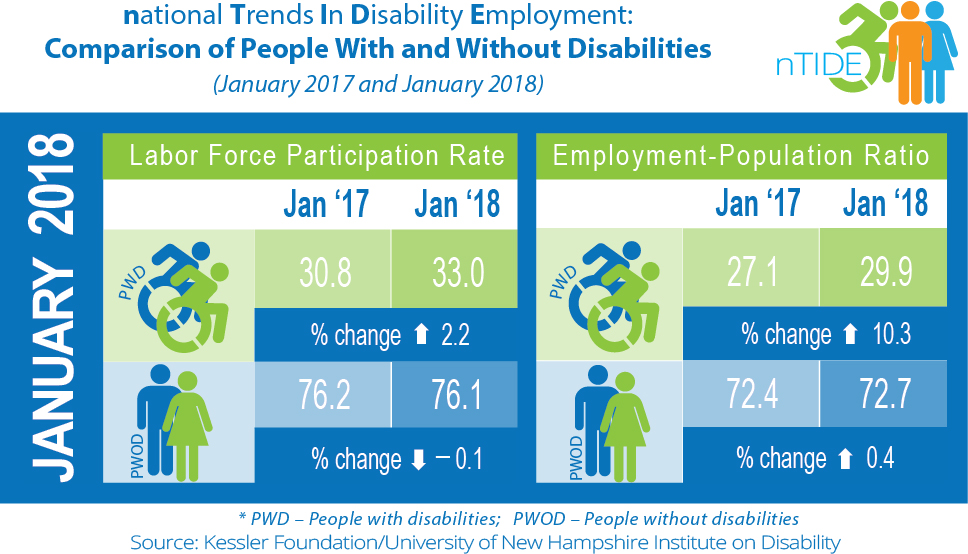 Durham, NH – January job numbers are a solid start to the new year for jobseekers with disabilities, according to today’s National Trends in Disability Employment – Monthly Update (nTIDE), issued by Kessler Foundation and the University of New Hampshire’s Institute on Disability (UNH-IOD). This extends the record trend to 22 consecutive months for this population. Targeted funding of employment initiatives is helping employers in need of workers connect with people with disabilities across the nation who are striving to work.

“This month’s increase in the employment-to-population ratio is truly impressive,” said Andrew Houtenville, PhD, associate professor of economics at UNH and research director of the Institute on Disability. “It’s the largest increase we’ve seen during the current upward trend in gains in the labor market for people with disabilities,” he emphasized.

“As the economy continues to improve, the labor market is tightening, and employers are feeling the pressure to fill open positions,” observed Rodger DeRose, president and chief executive officer of Kessler Foundation. “We fund the kinds of large-scale initiatives that aim to prepare jobseekers with disabilities to succeed in this competitive environment.” Since 2000, Kessler Foundation has awarded more than $41.5 million to innovative employment initiatives in the U.S. The Foundation recently announced its latest round of grant funding - $2.3 million for a variety of national and local programs.

Major national grants totaling $1.5 million were awarded to initiatives in the Midwest, the Midatlantic states, and Texas. The Autism Alliance of Michigan’s diversity initiative will create partnerships with vocational rehabilitation and provider agencies to promote employment of individuals with autism in automotive companies. The State University of Iowa, Center for Disabilities and Development’s Initiative, the Midwest Disability Employment Consortium: Just in Time Employment Supports, will launch pilot projects in Iowa, Nebraska, and South Dakota that use mobile technology platforms, such as the iPad, to enhance supported employment services. Easter Seals Staffing Network, a project of Easter Seals Serving DC|MD|VA, will match individuals with disabilities to private sector employers throughout Washington, D.C., Maryland, and Northern Virginia through a dynamic e-learning system and vocational support model. Communication Service for the Deaf, Inc.’s Works Job Club in Texas will launch a virtual career readiness program that will provide training for deaf and hard of hearing job seekers.

“These are the kinds of programs that will help fuel the positive trends reported in nTIDE,” said DeRose, “and ensure that people with disabilities are ready to meet the challenges of today’s workplace.”

Join our nTIDE Lunch & Learn series today, February 2, at 12:00pm Eastern. This live broadcast, hosted via Zoom Webinar, offers attendees Q&A on the latest nTIDE findings, provides news and updates from the field, as well as invited panelists to discuss current disability-related findings and events. Dr. Ellie Hartman of the University of Wisconsin-Stout Vocational Rehabilitation Institute, will join Dr. Houtenville, Dr. O’Neill, and Denise Rozell, policy strategist at AUCD, to discuss the Wisconsin PROMISE grant. You can join live, or watch the recordings at: www.ResearchonDisability.org/nTIDE.