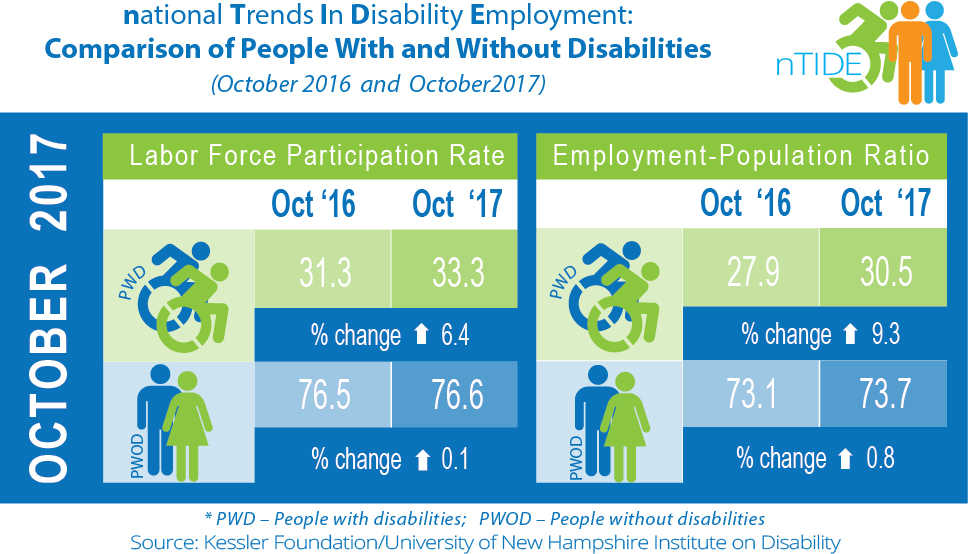 Durham, NH – The major economic indicators continue to reflect increasing inclusion of Americans with disabilities in the workforce, according to today’s National Trends in Disability Employment – Monthly Update (nTIDE), issued by Kessler Foundation and the University of New Hampshire’s Institute on Disability (UNH-IOD). Results from a new national survey show that many employers have implemented practices and processes for recruiting, hiring, training, and retaining people with disabilities. The 2017 Kessler Foundation National Employment and Disability Survey: Supervisor Perspectives underscores where success is being achieved and reveals opportunities for maximizing inclusion in the workplace.

“Although the job numbers remain positive, we need to remember that people with disabilities have yet to achieve their pre-Great Recession employment levels,” said Andrew Houtenville, PhD, associate professor of economics at UNH and research director of the Institute on Disability. “Kessler Foundation’s 2017 Survey, by identifying effective practices and processes for inclusion of people with disabilities in the workplace, provides new direction for efforts to narrow the employment gap between people with and without disabilities.”

On October 10, 2017, results of the Kessler Foundation National Employment and Disability Survey: Supervisor Perspectives, were released on Capitol Hill. More than 3,000 supervisors responded to the survey, sharing their views about their employers’ processes and practices for promoting success in the workplace for employees with and without disabilities. The results indicate how effective each of these processes and practices are for all employees, and provide new information on what works for individuals with disabilities, and where to focus efforts to achieve greater progress.

“Looking at the practices that work for individuals with and without disabilities is especially revealing,” noted Dr. O’Neill. “Just as universal design makes spaces usable by all, these practices can make employment more accessible for everyone. Despite being viewed as effective, however, some practices are being underutilized.”

For example, only 40% of supervisors had access to training in accessible application and interview techniques, although, in general, they viewed this as very effective and feasible to implement. Similarly, short-term outside assistance was seen as very effective for training of all employees, but used by only 19% of companies. Supervisors reported working from home, flexible scheduling and job sharing as effective accommodations for all employees, but implementation was limited in many companies.

“The survey results provide a new imperative,” said Dr. O’Neill. “Better implementation of effective practices is a pathway to greater employment opportunities for individuals with disabilities.”

The 2017 Survey was commissioned by Kessler Foundation and conducted by the University of New Hampshire Institute on Disability (UNH-IOD). This is the first survey to look at the effectiveness of these practices from the perspective of supervisors of employees with and without disabilities. Learn more at https://www.kesslerfoundation.org/kfsurvey17.