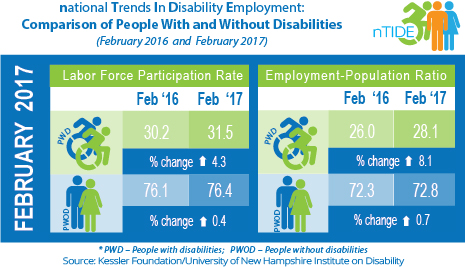 Durham, NH – Employment continues to increase for Americans with disabilities, building on the solid start to the new year, according to today’s National Trends in Disability Employment – Monthly Update (nTIDE), issued by Kessler Foundation and University of New Hampshire’s Institute on Disability (UNH-IOD). Achieving positive employment outcomes is especially challenging for high schools that serve young adults with moderate to severe disabilities.  Promising approaches are based on intervening early, coordinating educational and vocational resources, and cultivating local employers.

“The improvement in the proportion of people with disabilities working continues for the eleventh consecutive month,” according to John O’Neill, PhD, director of employment and disability research at Kessler Foundation. “This is the longest run of positive news since we began reporting the employment situation of people with disabilities in 2013,” he added.

“The trend in the employment of people with disabilities keeps marching upwards; of course there is still quite a ways to go,” said Andrew Houtenville, PhD, associate professor of economics at UNH.

Students with disabilities often struggle after graduating from the supportive environment of special services high schools, and are unprepared to transition into the work force. Bridge to Employment, a promising new pilot program funded by Kessler Foundation, is an example of the efforts to ease this transition for students in New Jersey who attend the Atlantic County Special Services School District (ACSSSD).

JEVS Human Services created the program to address the employment needs of the hardest to serve students. Taking a sophisticated approach, the program begins with a holistic assessment of the values, interests, personalities, and aptitudes of the students, in order to find work placements that are a good fit and provide possibilities for the students to develop—thus improving retention and reducing the long-term burden on the workforce development system. The program also connects students early on with the New Jersey Division of Vocational Rehabilitation Services (DVRS), a program collaborator, so there’s no gap in services for the students. Another key element to the program is the addition of a dedicated professional called a career navigator to help place students, in part by developing visual resumes using PowerPoint format, an engaging format for presenting their individual skills, interests, and strengths.

“We look forward to seeing how well the program fills the vital need for supports and services for high school students transitioning to the workplace,” said Elaine E. Katz, MS, CCC-SLP, senior VP of grants and communications at Kessler Foundation. “If Bridge to Employment succeeds in transitioning the ACSSSD students who are hardest to serve, this program could serve as a model for effective transition programs in other counties in New Jersey as well.”

Join our nTIDE Lunch & Learn series, starting today, March 10 at 12:00pm EST. This live broadcast, hosted via Zoom Webinar, will offer attendees Q&A on the latest nTIDE findings, provide news and updates from the field, as well as host-invited panelists to discuss current disability-related findings and events. Rita Landgraf, Professor of Practice and Distinguished Health and Social Services Administrator in Residence, University of Delaware, College of Health Sciences, joins Drs. Houtenville and O’Neill, Michael Murray of Office of Diversity and Inclusion at the U.S. Office of Personnel Management (OPM), and Denise Rozell, Policy Strategist at the Association of University Centers on Disabilities (AUCD), to discuss today’s findings as well as the positive return on advancing employment of individuals with disabilities. You can join live, or watch the recordings at: www.ResearchonDisability.org/nTIDE.  Find updates on Twitter #nTIDELearn.

NOTE: The statistics in the National Trends in Disability Employment Update are based on Bureau of Labor Statistics numbers, but are NOT identical. They’ve been customized by the University of New Hampshire to efficiently combine the statistics for men and women of working age (16 to 64). NTIDE is funded, in part, by grants from the National Institute on Disability, Independent Living and Rehabilitation Research (NIDILRR) (9ORT5022-02-00 & 90RT5017) and Kessler Foundation.