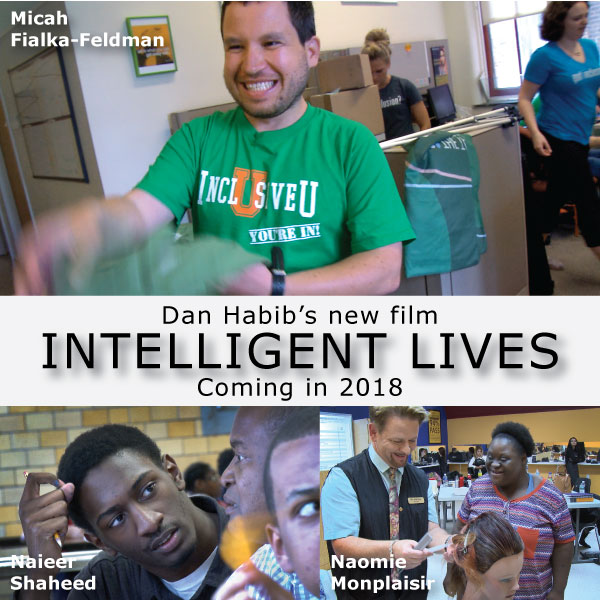 Is a 32-year-old man who co-teaches at Syracuse University classes intelligent? What about a 25-year-old woman who charms her way into the job of her dreams? How about a 17-year-old young man whose paintings are exhibited at major universities in Boston? Are they intelligent?

Would your opinion change if you knew that, as recently as the 1970s, all three of these people would have likely been institutionalized and forcibly sterilized?

Academy-Award winning actor Chris Cooper, the narrator of Intelligent Lives, unpacks the United States’ sordid history of intelligence testing, which led to people with intellectual disabilities carrying a clinical label of “moron,” “idiot,” or “feeble minded.”  The three central characters of Intelligent Lives — Micah Fialka-Feldman, Naomie Monplaisir, and Naieer Shaheed — would have been labeled this way had they been born in the first half of the 20th century. Their parents would have been counseled to send their children to live in an institution alongside hundreds or thousands of other people with disabilities. They might have been among the approximately 65,000 Americans forcibly sterilized in order to “improve the stock” of humanity during the U.S. eugenics movement. As recently as 1975, Micah, Naieer, and Naomie would not have had legal access to a public education.

But Micah was born in 1984. Today he is student at Syracuse University with a vibrant social life, a job co-teaching university classes, and a sophisticated grasp of social media — with an IQ of 40. Naieer was born in 1999. He is a talented visual artist and is immersed in general education classes and basketball games at a public high school in Dorchester, MA. Naomie is 25, and she sings and dances in her Providence, RI Creole church alongside her hip-hop producer brother, and she is on the cusp of obtaining her first paid, integrated job.

These three stories will be intertwined with Cooper’s tightly constructed narration about our evolving perspectives on the nature of intelligence. Cooper will also reveal his own connection to the film’s central themes: he and his wife Marianne Leone Cooper had a son, Jesse, whose intelligence was continually questioned because he had cerebral palsy. Jesse died suddenly in 2005 at age 17 from a seizure.

The film team – which includes executive producer Amy Brenneman, whose teenage daughter Charlotte has a disability – is planning a hybrid release strategy in conjunction with 30+ national partner organizations that will include: