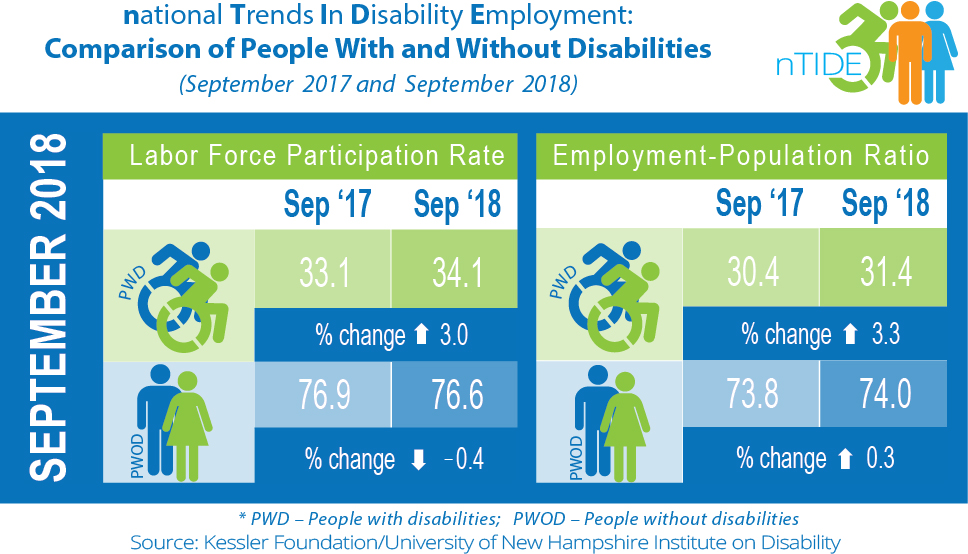 Durham, NH – The key economic indicators for Americans with disabilities resumed their upward trend, according to today’s National Trends in Disability Employment – Monthly Update (nTIDE), issued by Kessler Foundation and the University of New Hampshire’s Institute on Disability (UNH-IOD).

Each October, the US Department of Labor celebrates the contributions of Americans with disabilities to the labor force that drives our nation’s economy. The theme for National Disability Employment Awareness Month 2018 is “America’s Workforce: Empowering All.” Fostering empowerment requires environments that are truly inclusive. Applying the concept of universal design to buildings and transportation systems has improved inclusivity in the workplace. Expanding this concept beyond the bounds of infrastructure to encompass workplace processes and procedures will expand how inclusion is defined, and empower greater numbers of people with disabilities to achieve their employment goals.

“September data continues the uptick in economic indicators that we saw last month,” said Debra Brucker, PhD, research assistant professor at the UNH Institute on Disability. “A few more months of good news will reestablish the strong positive trend we saw from February 2016 to May 2018, where there was continuous improvement in the employment situation for people with disabilities,” she noted.

Incorporating the principles of universal design in plans for office buildings, terminals, hotels, stadiums, and other facilities, promotes integration and inclusion for people with disabilities. “To improve inclusivity, universal design can and should be defined in a much broader way, to include ‘soft’ as well as ‘hard’ elements,” according to John O’Neill, PhD, director of employment and disability research at Kessler Foundation. “Workplace processes and practices are ‘soft’ elements that can be designed to be equally effective for people with and without disabilities,” he explained.

Multiple examples of the use of “soft” universal design were evident from the 2017 Kessler Foundation National Employment and Disability Survey: Supervisor Perspectives, the first survey to look at the effectiveness of workplace practices from the perspective of supervisors of employees with and without disabilities. “Many organizations, for example, have onboarding and accommodation strategies, such as job shadowing, short-term outside assistance, flexible work schedules, and working from home, that are provided to all employees,” noted Dr. O’Neill. “Supervisors reported that many of these processes and practices, which promote retention and productivity, were as effective for employees with and without disabilities.”

From the survey, it was apparent that opportunities exist to expand the concept of universal design to these ‘soft’ elements of the workplace. “Conceptualizing universal design in this much broader context eases the integration of people of all abilities into all types of workplaces. Participating in a truly inclusive environment empowers all workers, including individuals with disabilities, to achieve their employment goals,” added Dr. Brucker.

Join our nTIDE Lunch & Learn series today, October 5, at 12:00 pm Eastern. This live broadcast, hosted via Zoom Webinar, offers attendees Q&A on the latest nTIDE findings, provides news and updates from the field, as well as invited panelists to discuss current disability-related findings and events. Sally Rogers, ScD, Executive Director of the Center for Psychiatric Rehabilitation and Research Professor at Boston University, joins Dr. Brucker, Dr. O’Neill, and Denise Rozell, policy strategist at AUCD, to discuss the state of vocational services and practices for individuals with psychiatric disabilities in the U.S. Join live, or watch the recordings at: www.ResearchonDisability.org/nTIDE.