nTIDE May 2018 Jobs Report: Despite Fewer Looking for Work, Gains Continue for Americans with Disabilities 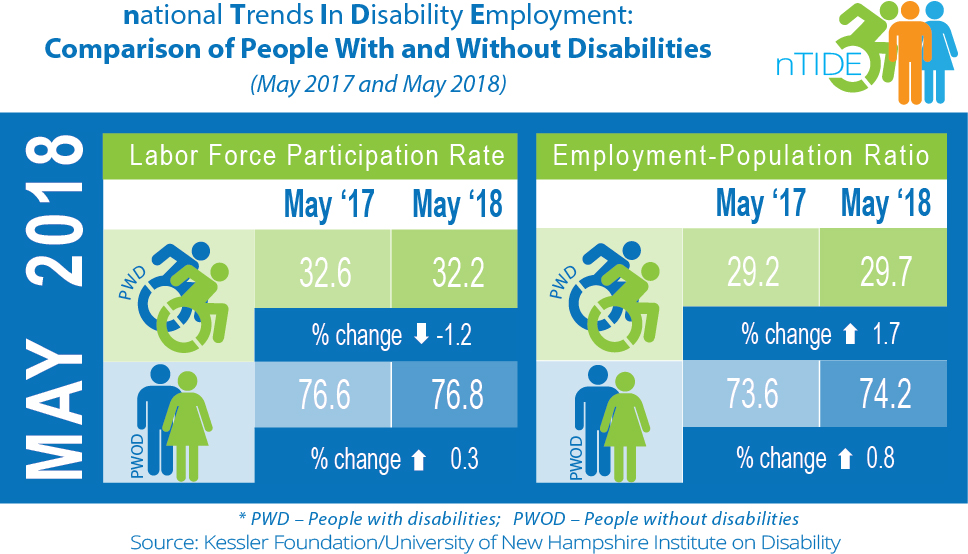 Durham, NH – Job gains continued for Americans with disabilities in May, although fewer were looking for work, according to today’s National Trends in Disability Employment – Monthly Update (nTIDE), issued by Kessler Foundation and the University of New Hampshire’s Institute on Disability (UNH-IOD).  While greater numbers of people with disabilities have entered the workforce over the past two years, Americans with disabilities are still striving for jobs that support their independence.  Employment First is a national initiative that has identified competitive, integrated employment as the cornerstone of full community participation by all people with disabilities. Employment First, which provides a framework for systems changes that prioritize employment, has been adopted in some form in 49 states and the District of Columbia.

“This is the 26th consecutive month that we are seeing improvement in the employment-to-population ratio,” according to John O’Neill, PhD, director of employment and disability research at Kessler Foundation. “It is indeed good news that we are seeing more people with disabilities finding jobs.”

“March 2016 was the last time we saw a decline in the labor force participation rate of people with disabilities when compared the same month in the prior year.  This could be signaling a softening in the degree to which people with disabilities are engaging in this expanding economy.  We will have to see how things go in June,” said Andrew Houtenville, PhD, associate professor of economics at UNH and research director of the Institute on Disability.

Employment First has gained momentum, with nearly every state acknowledging the goal of competitive, integrated employment for people with disabilities through legislation, executive order, policies or directives. “The growing acceptance of Employment First is encouraging, but to ensure its success, we must build a compelling case for its success,” said Kelly Nye-Lengerman, MSW, PhD, research associate at the University of Minnesota’s Institute on Community Integration, Research and Training Center on Community Living.  “We need to establish outcome measures in order to document how systems are changing on the federal, state and local levels. We anticipate that these data will show that participation in the workforce benefits employers and taxpayers,” she remarked, “as well as individuals with disability.”