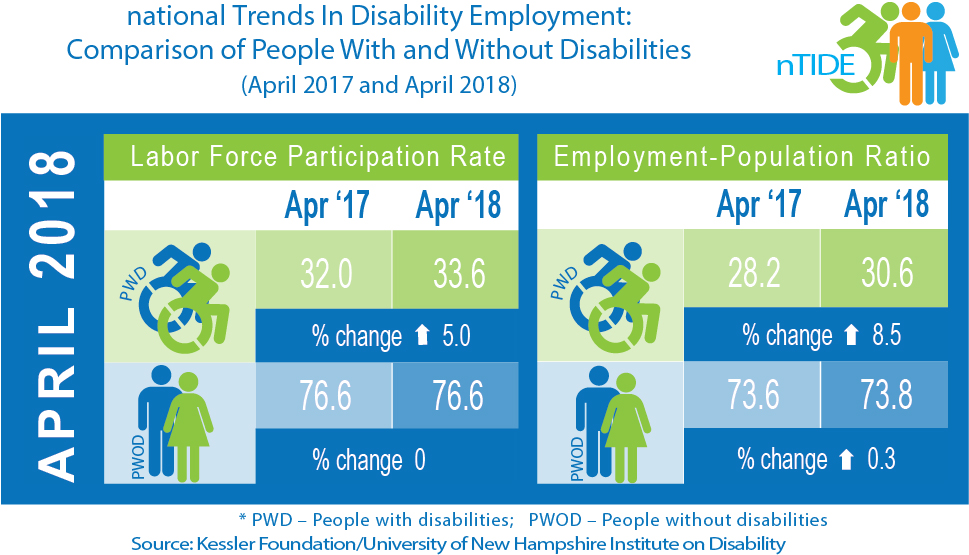 Durham, NH – Americans with disabilities added another month of job gains, according to today’s National Trends in Disability Employment – Monthly Update (nTIDE), issued by Kessler Foundation and the University of New Hampshire’s Institute on Disability (UNH-IOD). As today’s tight labor market offers greater opportunities for jobseekers with disabilities, there is renewed interest in strategies that help people with disabilities achieve their employment goals.

Individual Placement and Support (IPS) is an evidence-based vocational rehabilitation strategy that is helping people with disabilities achieve their employment goals. Implemented initially in the population with mental health issues, IPS is being tested in individuals with physical disability. Committing resources to evidence-based programs such as IPS will help close the employment gap between people with and without disabilities.

“It’s really stunning to see the gains made by people with disabilities, and that these gains continue to outpace the gains of people without disabilities. I wish we had monthly data from previous recessions to see if this is something that occurs when the economy is at full employment,” said Andrew Houtenville, PhD, associate professor of economics at UNH and research director of the Institute on Disability.

Fueled by objective evidence, there has been renewed emphasis on employment services for the population with spinal cord injury. A program based on the IPS model is being implemented by the Veterans Administration to help veterans with spinal cord injuries return to work. “To achieve positive outcomes among individuals with severe disabilities, there needs to be close collaboration between providers of vocational services and providers of medical rehabilitation services,” said Dr. O’Neill. “With the goal of placing and supporting individuals in competitive jobs, integrating these services into the rehabilitation is essential to successful programs. The development of policies and partnerships that support the coordination of these services should be a priority.”

Join our nTIDE Lunch & Learn series today, May 4, at 12:00 pm Eastern. This live broadcast, hosted via Zoom Webinar, offers attendees Q&A on the latest nTIDE findings, provides news and updates from the field, as well as invited panelists to discuss current disability-related findings and events. Deborah R. Becker, MEd, CRC, will join Dr. Houtenville, Dr. O’Neill, and Denise Rozell, policy strategist at AUCD, to discuss the Individual Placement and Support model for advancing the employment of individuals with disabilities. Join live, or watch the recordings at: www.ResearchonDisability.org/nTIDE.