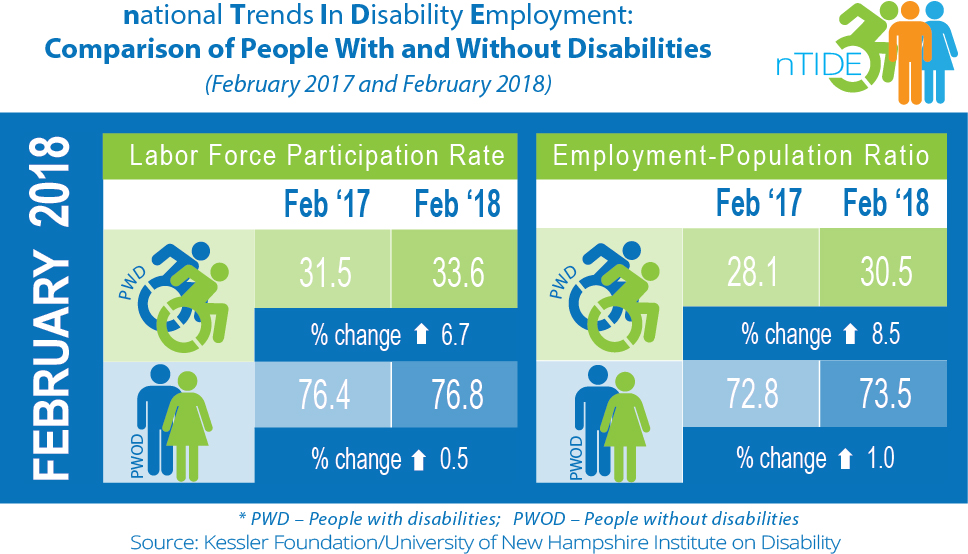 Durham, NH – The major economic indicators held more good news for Americans with disabilities, according to today’s National Trends in Disability Employment – Monthly Update (nTIDE), issued by Kessler Foundation and the University of New Hampshire’s Institute on Disability (UNH-IOD). Gains for jobseekers with disabilities moved higher for the 23rd consecutive month. Several factors may be contributing to ongoing job growth. By addressing policies that hinder employment opportunities, state-level initiatives are making progress toward greater inclusion of people with disabilities in the workforce.

“The gains seen by people with disabilities this month, and over the last 23 months, have far exceeded gains seen by people without disabilities. This suggests that as we approach full employment, employers may be tapping groups that were previously overlooked,” said Andrew Houtenville, PhD, associate professor of economics at UNH and research director of the Institute on Disability.

Efforts on the state level are promoting legislative reforms that prioritize the incorporation of disability in workforce development programs. Partnerships such as the State Exchange on Employment & Disability (SEED) are providing state legislators with the resources they need to develop effective policies for ensuring ongoing progress toward inclusive workforces. Major universities are contributing to state-level efforts through collaborations such as the Midwest Disability Employment Consortium, which aims to improve employment outcomes for people with disabilities in the Midwest.

The Consortium includes the University Centers for Excellence in Developmental Disabilities (UCEDD) in Iowa, Nebraska and South Dakota. “Our collective goal is to improve employment outcomes for people with disabilities in the Midwest,” said Julie Christensen, LMSW, PhD, director of the Iowa UCEDD. “We are thrilled to partner with Kessler Foundation on this important project - Just in Time Employment Supports - which is based on a unique multi-state approach to finding innovative solutions for expanding access to long-term employment services and supports for people with disabilities.”

“The Consortium will apply readily available virtual technology platforms in its plans to address the employment needs of people with disabilities in these three states,” explained Elaine E. Katz, MS, CCC-SLP, senior vice president of grants and communications at Kessler Foundation. “We anticipate that this approach will yield large-scale outcomes that will benefit businesses as well as jobseekers,” Katz remarked. The Consortium will also serve as a disability employment ‘think tank’, and a hub for the collection of valuable data on the best practices for competitive, sustainable employment opportunities in these mid-western states.