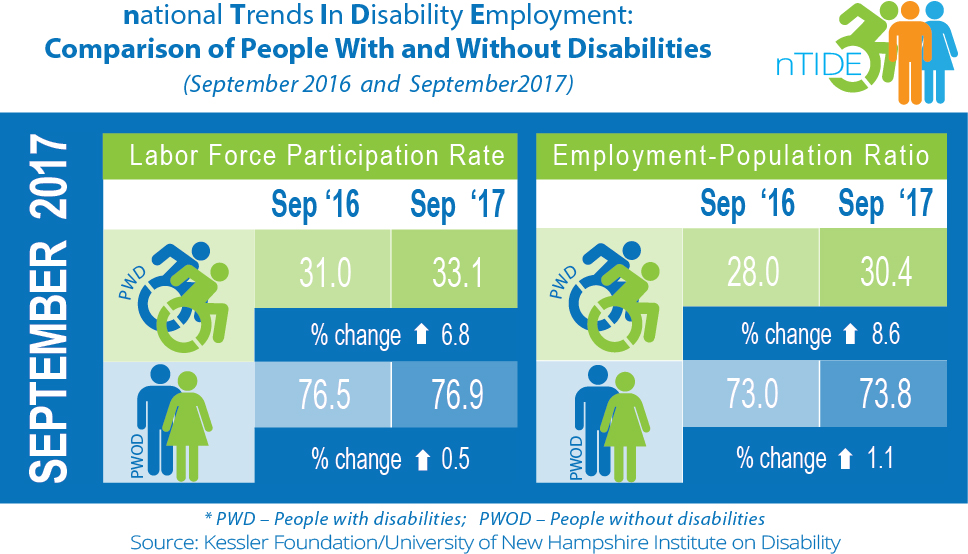 Durham, NH. Americans with disabilities continue to close in on pre-recession employment levels with yet another month of strong job numbers, according to today’s National Trends in Disability Employment – Monthly Update (nTIDE), issued by Kessler Foundation and the University of New Hampshire’s Institute on Disability (UNH-IOD). This extends the record trend to 18 consecutive months for this population. The process of recovering from disabling injuries often hinders people of working age from returning to work.  Many inpatient rehabilitation facilities do not offer employment-oriented services, and after discharge, these services are fragmented or nonexistent. To help individuals stay in the workplace, researchers are looking at the impact of incorporating access to vocational counseling and resources into the medical rehabilitation process.

”In spite of Hurricanes Irma and Harvey, which were predicted to slow job growth, the proportion of people with disabilities working continued to improve for the eighteenth consecutive month,” according to John O’Neill, PhD, director of employment and disability research at Kessler Foundation. “This growth is positive, and may indicate that people with disabilities are closing in on their pre-Great Recession employment levels.”

“Although these numbers are very encouraging, full recovery to pre-Great Recession employment levels is still on the horizon, said Andrew Houtenville, PhD, associate professor of economics at UNH and research director of the Institute on Disability.  “If we look back to September 2009, which was the first month that the Bureau of Labor Statistics began reporting disability statistics, the employment-to-population ratio was 32.7 percent for people with disabilities. Keep in mind that this followed the major job loss months of February and August of 2009, so the employment-to-population ratio prior to the recession was probably well above this percentage,” he noted.

One way to expand employment for people with disabilities is to institute processes that facilitate returning to work. One promising strategy is early intervention during inpatient rehabilitation. “Many inpatients have an excellent chance of returning to work when they engage with vocational support services soon after injury,” said Dr. O’Neill, “and maintain that connection through outpatient rehabilitation.”  Dr. O’Neill is lead investigator for a pilot project underway at Kessler Institute for Rehabilitation that is helping patients return to work after spinal cord injury. “Employment rates remain extremely low for individuals with spinal cord injury,” he said, “despite advances in rehabilitative care.”

In its first year, this project, funded by the Craig H. Neilsen Foundation, has exceeded expectations. Of the 51 newly injured individuals who enrolled, 15 have returned to work and 14 have actively engaged with the New Jersey Division of Vocational Rehabilitation Services to plan their return to the workplace. Mary Lea West, a full-time vocational resource facilitator, meets with patients during their stay and follows up with them after discharge, coordinating vocational rehabilitation services and addressing needs for assistive technology and accommodations.

The replication of this model would have the potential to return large numbers individuals with disabilities to work, according to Dr. O’Neill. “The opportunity is there,” he asserted. “In partnership with such stakeholders as public and provide insurers, agencies for workforce development, and trade organizations, inpatient rehabilitation hospitals can function as a hub for effective return to work/stay at work programs.”

Join our nTIDE Lunch & Learn series today, October 6, at 12:00pm Eastern. This live broadcast, hosted via Zoom Webinar, offers attendees Q&A on the latest nTIDE findings, provides news and updates from the field, as well as invited panelists to discuss current disability-related findings and events. Meredith L. Dedona of the U.S. Department of Labor, Office of Disability and Employment Policy, will join Drs. Houtenville and O’Neill, and Denise Rozell, policy strategist at AUCD, to discuss today’s findings. You can join live, or watch the recordings at: www.ResearchonDisability.org/nTIDE.