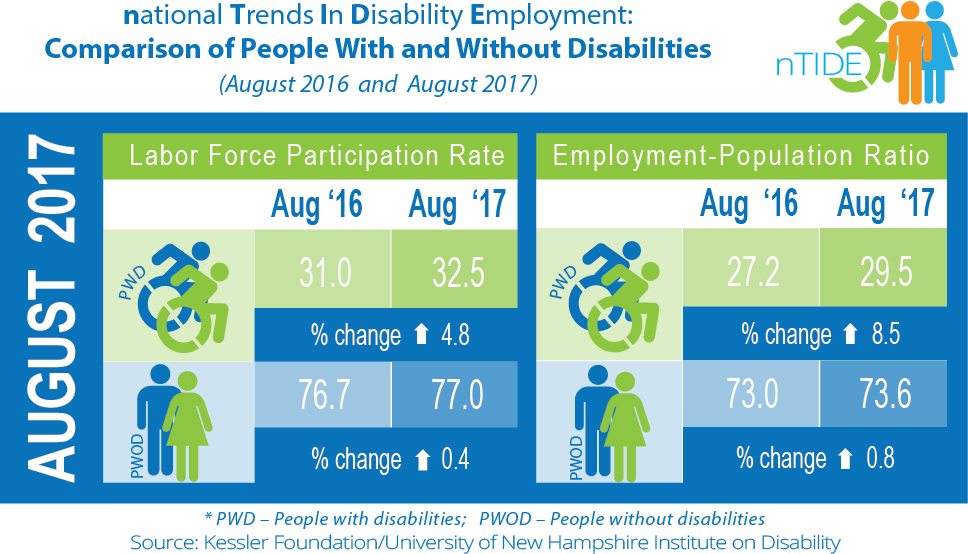 Durham, NH –As we celebrate Labor Day, the job news remains upbeat for Americans with disabilities, according to today’s National Trends in Disability Employment – Monthly Update (nTIDE), issued by Kessler Foundation and the University of New Hampshire’s Institute on Disability (UNH-IOD). For the population with disability, the trend has now reached 17 consecutive months. Accessible public transportation systems, such as buses and trains, provide pathways to independence for people with disabilities. Targeted training programs can help people with disabilities learn to use public transportation safely and efficiently, expanding their access to employment, education, health care, and community activities.

“The proportion of people with disabilities working continues to improve for the seventeenth consecutive month,” noted John O’Neill, PhD, director of employment and disability research at Kessler Foundation. “While this prolonged stretch of gains is encouraging, we need to remember that the gap in employment between people with and without disabilities is still a large one,” he added.

“Transportation is often cited as a major barrier by people with disabilities, especially those who are seeking employment,” noted Debra Brucker, PhD, research assistant professor at UNH. “Yet, we see evidence that this is a barrier that can be successfully overcome, according to the 2015 Kessler Foundation National Disability & Employment Survey,” she added.

Transportation training programs and services, such as the New Jersey Travel Independence Program (NJTIP) @ Rutgers University, are helping people use their local transportation systems, safely and independently. “Our hands-on training program expands the sphere of mobility for people with disabilities in providing them with the skills, experience, and confidence they need to travel on their own,” said Karen Alexander, Managing Director at NJTIP @ Rutgers University. “More than 400 individuals have completed our program,” she noted, “and two-thirds of these graduates have become regular transit users. Being able to navigate public transportation independently opens up their options for employment and education, as well as greater enjoyment in the many activities offered in our communities.”

“Because access to transportation is a national issue, we understand the need to look at ‘the big picture',” emphasized Alexander. “At NJTIP we also participate in transportation research, provide information on available resources, and work to increase the mobility options available to all people."

Join our nTIDE Lunch & Learn series today, September 1, at 12:00pm Eastern. This live broadcast, hosted via Zoom Webinar, offers attendees Q&A on the latest nTIDE findings, provides news and updates from the field, as well as invited panelists to discuss current disability-related findings and events. Donna Smith with Easterseals Project Action Consulting, will join Drs. Brucker and O’Neill, and Denise Rozell, policy strategist at AUCD, to discuss today’s findings. You can join live, or watch the recordings at: www.ResearchonDisability.org/nTIDE.