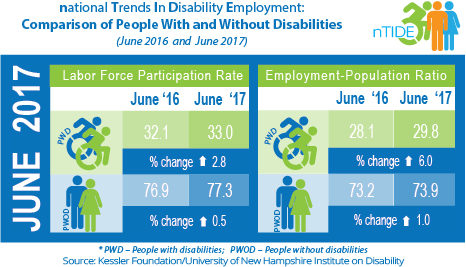 DURHAM, NH – Americans with disabilities continued to engage in the labor market, reaching 15 months of job gains, according to today’s National Trends in Disability Employment – Monthly Update (nTIDE), issued by Kessler Foundation and the University of New Hampshire’s Institute on Disability (UNH-IOD). This extends the longest stretch of recorded gains for this population. As the nation implements the Workforce Innovation and Opportunity Act (WIOA) of 2014, vocational rehabilitation (VR) services are evolving to better serve people with significant disabilities. By aligning VR with programs for students and young adults with severe disabilities, there are more options for their transition to competitive, integrated employment.

“Congress has given a clear directive to focus on competitive integrated employment and to positively impact the workforce participation rate of persons with disabilities,” states Stephen A. Wooderson, CEO of the Council of State Administrators of Vocational Rehabilitation (CSAVR).”As outlined in WIOA, the priority for public vocational rehabilitation programs is serving job seekers with significant disabilities.” With the emphasis on more comprehensive preparation for employment and extended support services in the workplace, connecting with VR is essential for youth and adults who are striving to work. “Incorporating work experiences during high school increases the likelihood of employment after graduation,” notes Wooderson, “and options for customized employment and supported employment help meet the needs of jobseekers with significant disabilities.”

Join our nTIDE Lunch & Learn series today, July 7, at 12:00pm Eastern. This live broadcast, hosted via Zoom Webinar, offers attendees Q&A on the latest nTIDE findings, provides news and updates from the field, as well as invited panelists to discuss current disability-related findings and events. Wendy Parent-Johnson, Executive Director, Center for Disabilities, Sanford School of Medicine at the University of South Dakota, will join Drs. Houtenville and O’Neill, and Denise Rozell, policy strategist at AUCD, to discuss today’s findings. You can join live, or watch the recordings at: www.ResearchonDisability.org/nTIDE.