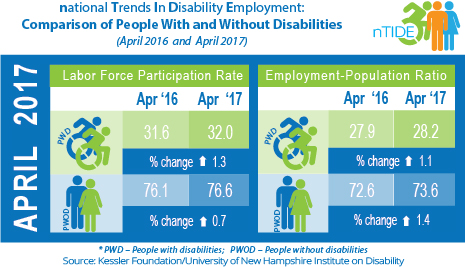 Durham, NH – Job gains continued for Americans with disabilities at a more modest rate, according to today’s National Trends in Disability Employment – Monthly Update (nTIDE), issued by Kessler Foundation and the University of New Hampshire’s Institute on Disability (UNH-IOD). This encouraging trend has extended to 13 months. Transitioning to civilian employment remains a challenge for many veterans, especially veterans with disabilities. Community-based organizations are succeeding in partnering with businesses to help veterans find competitive jobs.

“The improvement in the proportion of people with disabilities working continues its upward trend for the 13th consecutive month, although the magnitude of the gains is not as great as we have seen recently,” according to John O’Neill, PhD, director of employment and disability research at Kessler Foundation. “This employment growth remains encouraging and shows people with disabilities are striving to work as they move toward pre-Great Recession employment levels,” he added.

Since May is Military Appreciation Month, our focus is on outreach that benefits veterans with disabilities. The GI Go Fund, a New Jersey-based nonprofit, reaches out into the community to address veterans’ needs for comprehensive services, including jobs. Through partnerships with major corporations and seed funding from Kessler Foundation, 50 veterans with disabilities were placed in home-based customer service positions through their Disabled Veterans to Work Program.

“Because of this Program’s success here in New Jersey, veterans with disabilities are being hired in cities across the U.S.,” said Elaine E. Katz, senior vice president of grants and communications at Kessler Foundation. “Our relationship with the GI Go Fund has also benefited Kessler Foundation’s research into the debilitating symptoms of Gulf War Illness,” she noted. “Studying the effects of Gulf War Illness requires enrolling sufficient numbers of Gulf War-era veterans. With their deep connections to the veteran community, the GI Go Fund has referred many participants, helping our scientists explore the underlying mechanisms for the symptoms of cognitive fatigue in these veterans.”

Join our nTIDE Lunch & Learn series today, May 5 at 12:00pm EST. This live broadcast, hosted via Zoom Webinar, offers attendees Q&A on the latest nTIDE findings, provides news and updates from the field, as well as invited panelists to discuss current disability-related findings and events. John Butterworth, Director of Employment Systems Change and Evaluation at the Institute for Community Inclusion, joins Drs. Houtenville and O’Neill, and Denise Rozell, policy strategist at AUCD, to discuss today’s findings. You can join live, or watch the recordings at: www.ResearchonDisability.org/nTIDE.

NOTE: The statistics in the National Trends in Disability Employment Update are based on Bureau of Labor Statistics numbers, but are not identical. They are customized by UNH to combine the statistics for men and women of working age (16 to 64). NTIDE is funded, in part, by grants from the National Institute on Disability, Independent Living and Rehabilitation Research (NIDILRR) (9ORT5022 and 90RT5017) and Kessler Foundation.