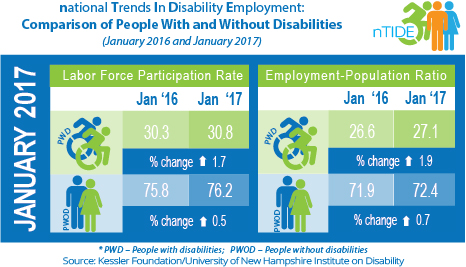 Durham, NH – Momentum carried employment gains into the new year, extending the longest upward trend for Americans with disabilities since the Great Recession, according to today’s National Trends in Disability Employment – Monthly Update (nTIDE), issued by Kessler Foundation and University of New Hampshire’s Institute on Disability (UNH-IOD). In transition programs for jobseekers with disabilities, a multi-level approach to job training can improve employment outcomes. Developing the placement skills of disability service providers, as well as the job skills of the individuals they serve, creates a sustainable framework for optimal transitions to the workplace.

“Last year, 2016 was a very good year for the employment of people with disabilities—see our 2016 nTIDE Year in Review—and the good news is continuing in 2017,” remarked Andrew Houtenville, PhD, associate professor of economics at UNH.

Achieving success in the workplace for adults with developmental disabilities presents unique challenges - for jobseekers, vocational counselors, job coaches, and employers. Meeting these challenges requires a comprehensive approach, exemplified by the Maryland Customized Employment Project, a collaborative effort of two state agencies and five service providers. This project is based on formal staff training in customized employment, which is offered through intensive workshops, a three-part certification process, and one-on-one mentoring by experts in the field, culminating in each staff person being paired with a jobseeker. Working together, they develop a Customized Employment Plan that details the prospective employee's interests and abilities, the initial step toward networking in the community and connecting with the needs of employers.

“Dozens of disability employment professionals throughout Maryland are gaining valuable placement skills and putting them to use through this customized employment project,” said Elaine E. Katz, MS, CCC-SLP, senior VP of grants and communications at Kessler Foundation, which provides project funding through a large Signature Employment Grant to SEEC, a Maryland-based nonprofit dedicated to full inclusion for people with developmental disabilities. “This innovative skills-based approach is succeeding because it effectively engages, motivates and empowers service providers, jobseekers and families, while maintaining a focus on employers' needs. This is the type of comprehensive project that can serve as a model for addressing the extraordinarily high rates of poverty and unemployment among working-age people with developmental disabilities.”

Join our nTIDE Lunch & Learn series, starting today, February 3 at 12:00pm EST. This live broadcast, hosted via Zoom Webinar, will offer attendees Q&A on the latest nTIDE findings, provide news and updates from the field, as well as host-invited panelists to discuss current disability-related findings and events. Karen Tamley, Commissioner of the Mayor’s Office for People with Disabilities, joins Drs. Houtenville and O’Neill, Michael Murray of AAPD, and Michael Gamel-McCormick, PhD, of the Association of University Centers on Disabilities (AUCD), to discuss today’s findings as well as employment for people with intellectual and developmental disabilities. You can join live, or watch the recordings at: www.ResearchonDisability.org/nTIDE.

NOTE: The statistics in the National Trends in Disability Employment Update are based on Bureau of Labor Statistics numbers, but are NOT identical. They’ve been customized by the University of New Hampshire to efficiently combine the statistics for men and women of working age (16 to 64). NTIDE is funded, in part, by grants from the National Institute on Disability, Independent Living and Rehabilitation Research (NIDILRR) (9ORT5022-02-00 & 90RT5017) and Kessler Foundation.