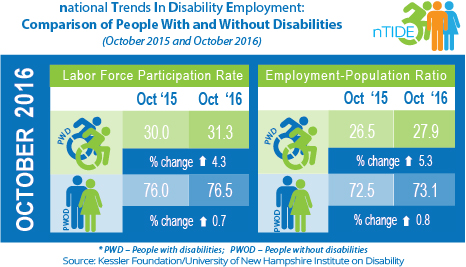 Durham, NH – Trend continues for Americans with disabilities as economic indicators improve for seventh consecutive month, according to today's National Trends in Disability Employment – Monthly Update (nTIDE), issued by Kessler Foundation and University of New Hampshire’s Institute on Disability (UNH-IOD). During the month of November, our attention turns to efforts to return veterans to the workforce. The employment programs resulting in job gains for veterans with disabilities may serve as models for the broader population of jobseekers with disabilities.

Unemployment is especially high among veterans with spinal cord injury, a catastrophic injury resulting in significant physical disability and long-term risk for secondary medical complications. In 2005, the Veterans Health Administration in Tampa, Florida, conducted a prospective, randomized study in this population comparing the impact of traditional vocational rehabilitation with a model of evidence-based supported employment - the Spinal Cord Injury Vocational Integration Program (SCI-VIP). Veterans in the SCI-VIP received individual placement and support in an integrated program of rehabilitation and vocational services. This group achieved competitive employment rates 2.5 times higher than those receiving traditional vocational services (25.9 percent v. 10.5 percent). “That such gains were achieved in this middle-aged, medically complex population, is very impressive,” said Dr. O’Neill, “especially given the average duration since injury of more than ten years. Such an approach to integrated vocational services may prove beneficial in other populations with significant disabilities and low rates of returning to work.”

Join our nTIDE Lunch & Learn series, starting today, November 4 at 12:00PM EST. This live broadcast hosted via Zoom Webinar will offer attendees Q&A on the latest nTIDE findings, provide news and updates from the field, as well as host-invited panelists to discuss current disability-related findings and events. Taryn Williams, Chief of Staff at the Office of Disability Employment Policy at the US Department of Labor, joins Drs. Houtenville, O’Neill and Michael Gamel-McCormick to discuss today’s findings. You can join live, or watch the recordings at www.ResearchonDisability.org/nTIDE.

NOTE: The statistics in the National Trends in Disability Employment – Update are based on Bureau of Labor Statistics numbers, but are NOT identical. They have been customized by the University of New Hampshire to efficiently combine the statistics for men and women of working age (16 to 64). nTIDE is funded, in part, by grants from the National Institute on Disability, Independent Living and Rehabilitation Research (NIDILRR) (90RT5022-02-00 & 90RT5017) and Kessler Foundation.